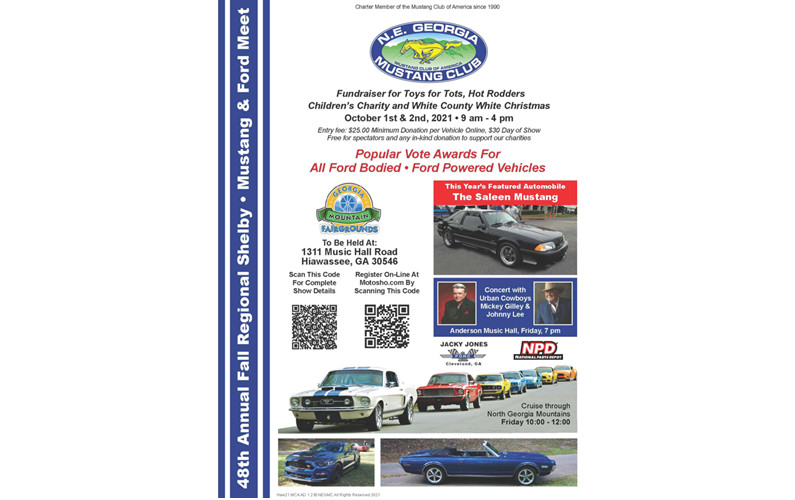 The Hiawassee Car Show date is rapidly approaching. There are some new developments I wish to share with you along with a reminder of the event schedule. 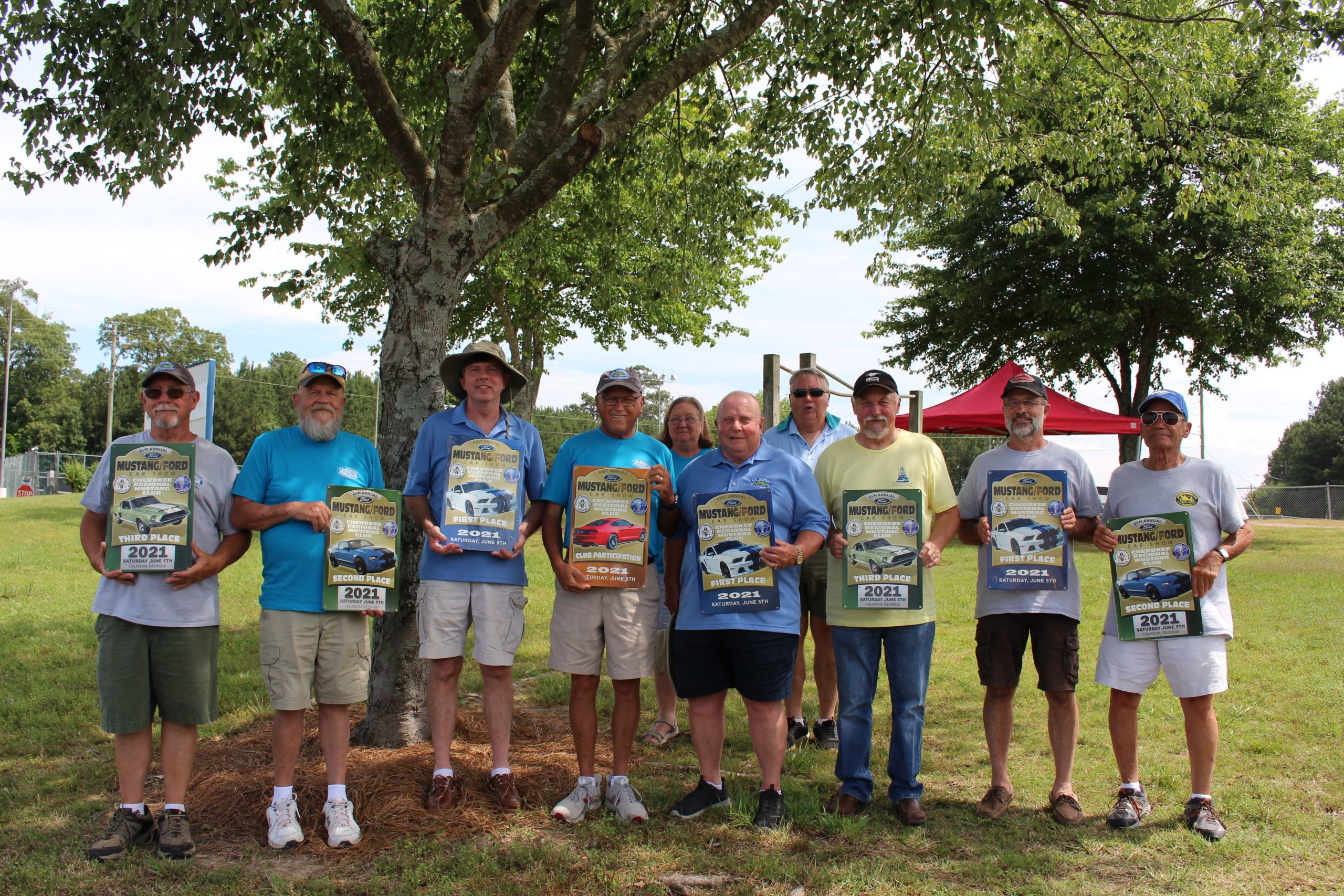 On Saturday, June 5, the Northeast Georgia Mustang Club attended the Cherokee Regional Mustang Club’s Car Show.  The car show was held at Gordon Central High School located in Calhoun, GA.  Although the forecast was for a good chance of rain, the weather turned out to be nice and dry for the show.

Overall everyone enjoyed a great day at the car show.

In the words of our club members – this was an incredible event! Everyone had a great time and are looking forward to the next NEGMC event. It was great to hang with club members again after so long. We refreshed old friendships and made new ones during the day.

Our NEGMC had 11 cars cruising to the Mustang Museum of America and to Barber Motorsports Park. People came from many different places and met us along the way. They traveled from Newnan, Hartwell, Cumming, Braselton, Suwanee, Cedartown, Cornelia, Gainesville and Loganville. We met people along the way at entrances to the interstate, at welcome centers and met some at the Mustang Museum of America. One members brother came, who didn’t have a Mustang but wore a Mustang hat so he would fit in. It was so cool to spend such quality time together with the NEGMC club members. After we spent time at the Mustang Museum of America we decided to make another stop at Buc-ee’s to refuel and eat lunch. The Buc-ee’s gas station was something to see with over 100 gas pumps and a huge convenience store. Then off to Barber. We toured the motorcycle museum, parked together in the fan zone, watched the Historic’s race and showed our driving skills while doing 3 parade laps around the track. It was a full day ending with dinner as a group. Great fun!! 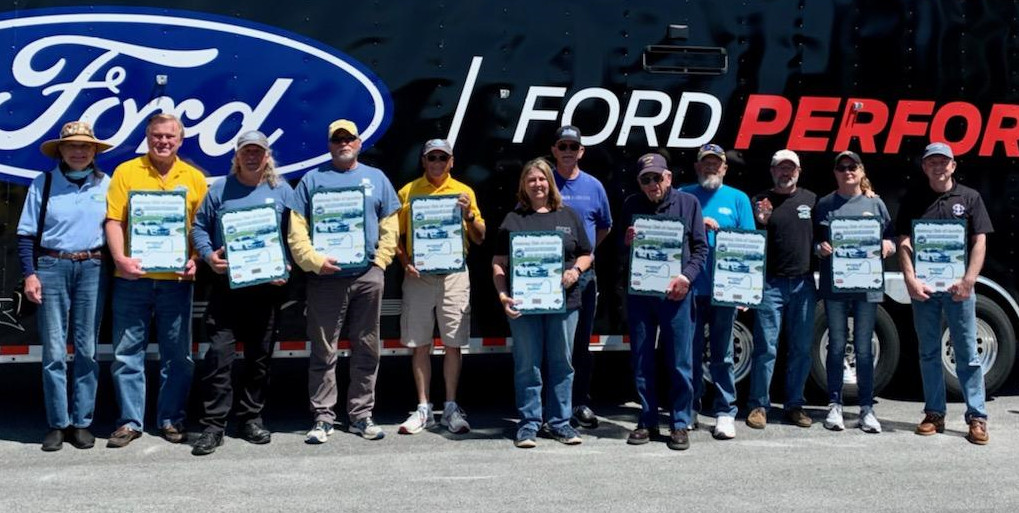 This past weekend’s Mustang Club of America’s 45th Anniversary Car Show saw over 200 Mustangs attending the event which was held at the Road Atlanta track in Braselton, GA.  The NE Georgia Mustang Club was well represented with members both showing their Mustangs and dropping by as spectators.  Those members included three board members; a past president; a past treasurer and past grille medallion winners.

Each of the NEGMC members that entered their Mustangs in the judged portion of the car show received an award in their respective classes.

Congratulations to Rick & Cher Hayslip who received a Grille Medallion for their Black Saleen coupe.

Attending the car show in the non-judged Display Only category were:

NEGMC members attending as spectators were:

Additionally two of the NEGMC’s Sponsors attended as spectators: 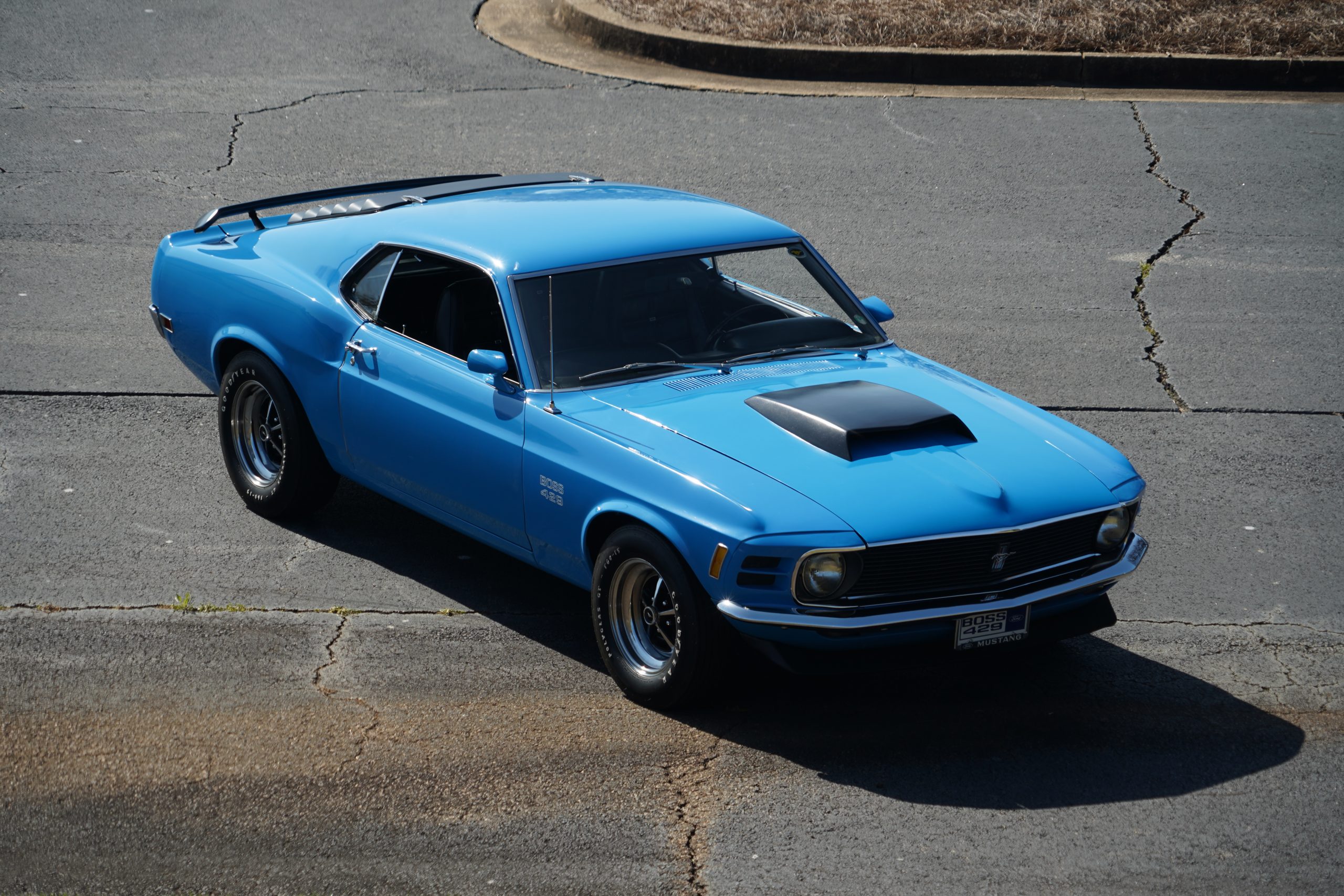 Yearone 2021 was an awesome show with 174 cars in attendance. Even though the weather was a little cool and windy, everyone seemed to enjoy showing their cars.
The money raised at this show will go toward NEGMC’s annual goal for the charities we support, Toys for Tots, White County White Christmas and Hot Rodders Children’s Charities.
Many thanks to YearONE for hosting this event. Thank you for attending and make sure to check our website and social media pages for other club events scheduled for 2021. 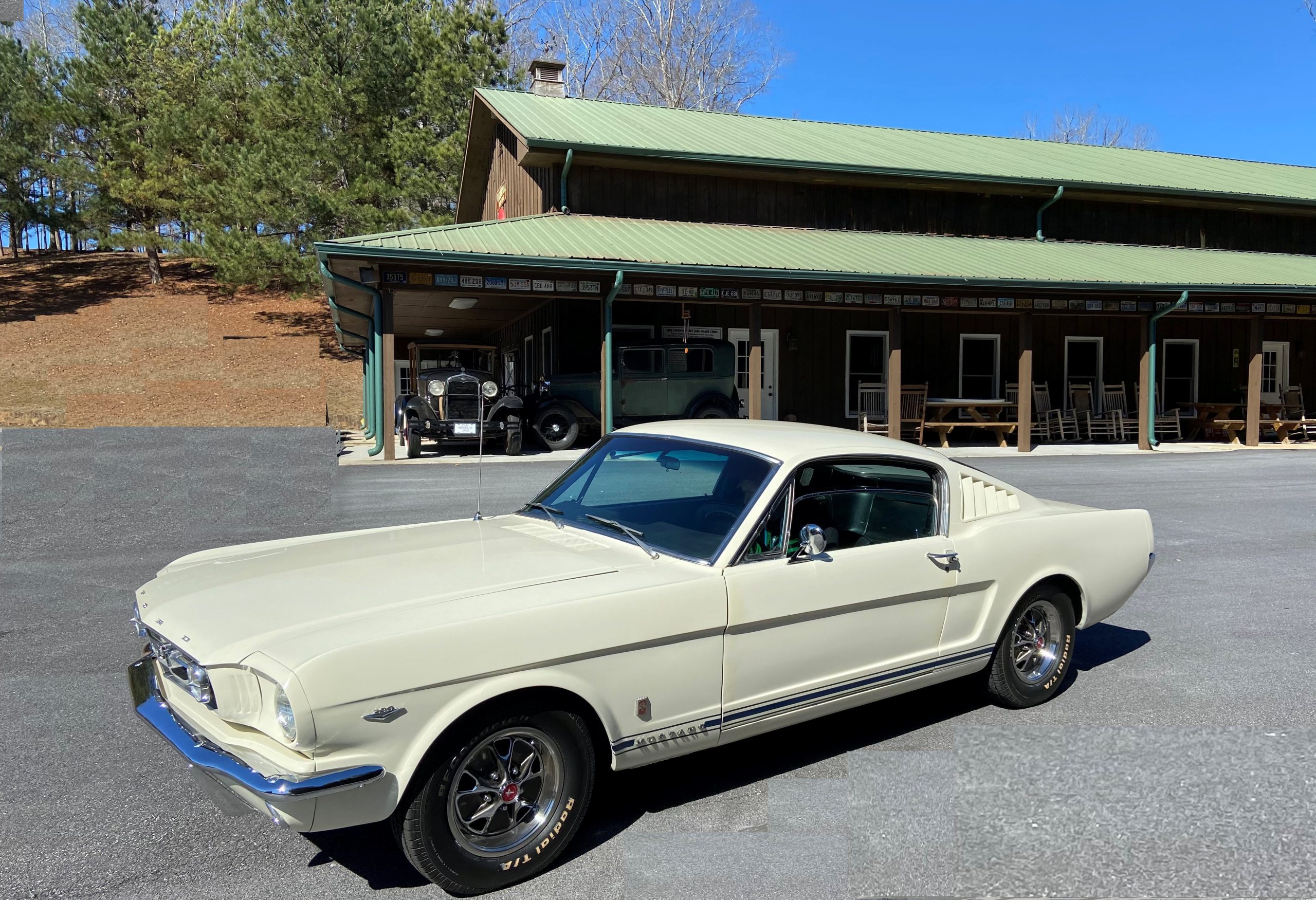 Our first meeting for 2021 was a huge success. We had close to 40 people in attendance and 15 cars on the cruise. We discussed many things happening with the club and how well the membership is going. As of today we have 104 members, way ahead of last years membership on this date. We also went over the calendar that was sent out prior to the meeting and the events we plan on attending this year. We have 16 members that answered my email stating they were attending the MCA event at Road Atlanta in April.
Three new members attended the meeting, Nathan Jenkins, Chris Ring and Tim Ochipa. Welcome to the club!
The new board members were introduced, Shirley Rider Treasurer and Gary Dyck Secretary.
The annual awards were handed out to members that achieved over 100 points that are necessary to receive pins. There were 14 recipients this year.

The three Prestige Award winners were:

Take a look at the awards program on the NEGMC website to see how you can receive your pin or win the Prestige Award this year. The awards program will be reset starting with this meeting going forward.
The cruise was awesome, as always, thanks to Gary Dyck for planning our route. We managed to stay together throughout the cruise, which made the cruise even more fun. Ronn and Will were able to take some incredible pictures. Their Mustang was running very strong as Ronn passed everyone while Will was taking pictures of all the cars on Hwy 365. As we drove through Helen people were taking pictures of our cars. It’s always fun to see a string of Mustangs coming down the road. What a a great day to cruise as we were not the only club out for the day. We saw a Corvette club and passed a 4Runner club out cruising, as well.
Don’t forget to sign up for the March show at YEARONE on Motosho. Also if you haven’t renewed your membership, go to the NEGMC website to register.
Please click on the highlighted areas above to view and sign up for the different items I discussed.
The car of the month is a white 1966 GT Fastback belonging to one of the new members, Nathan Jenkins. Congratulations! 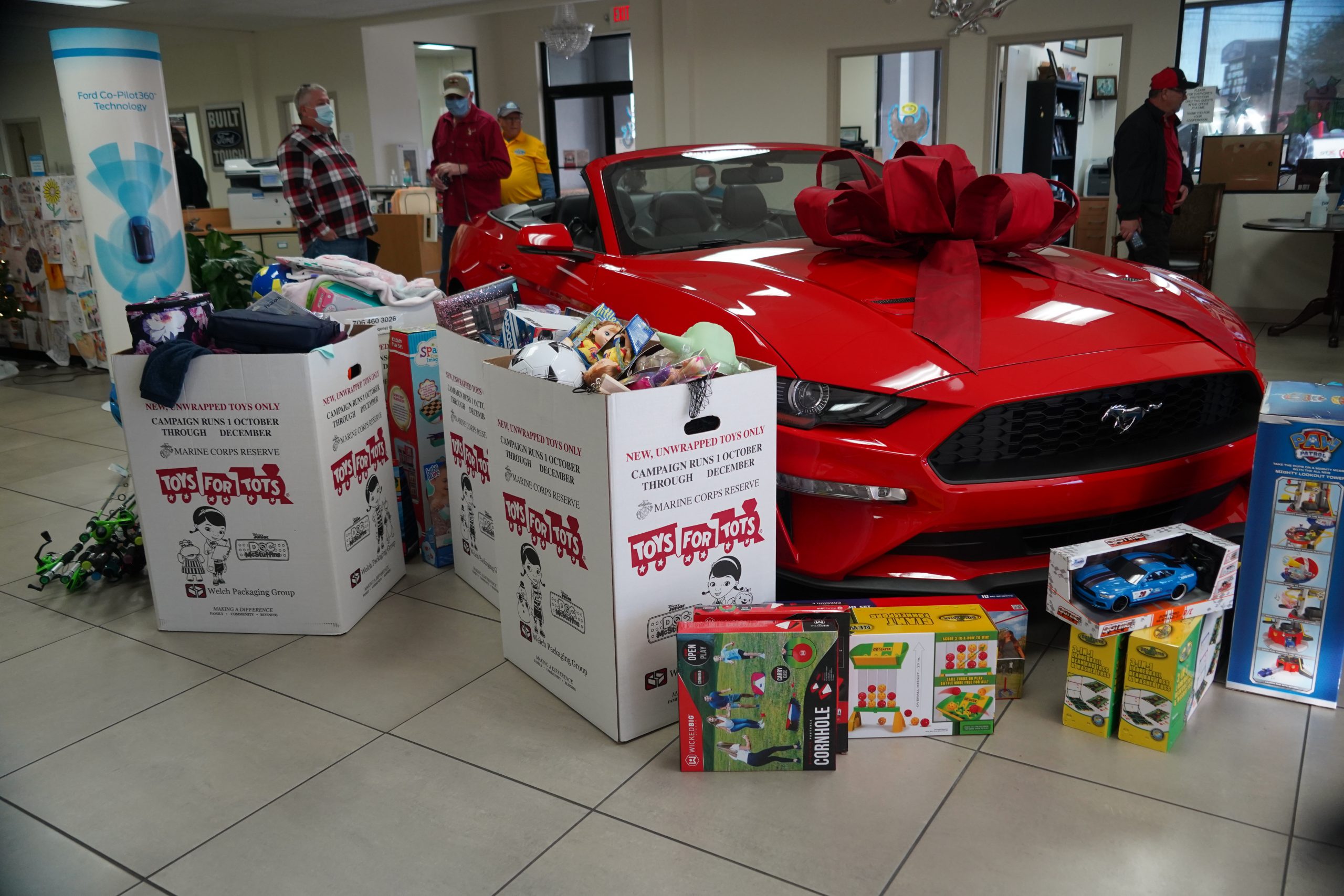 Our final activity for 2020 was the Toys for Tots shopping trip and December club meeting. Many NEGMC members participated and attended the meeting at Jacky Jones Ford. As you may know NEGMC has supported Jacky Jones Toys for Tots and the White County White Christmas initiative for over 10 years. Its incredible how the members of the club are always ready to give back to the community.
Ronn and Will Lippman’s 1965 Red Mustang was voted car of the month.
Thank you NEGMC for such an outstanding year!! 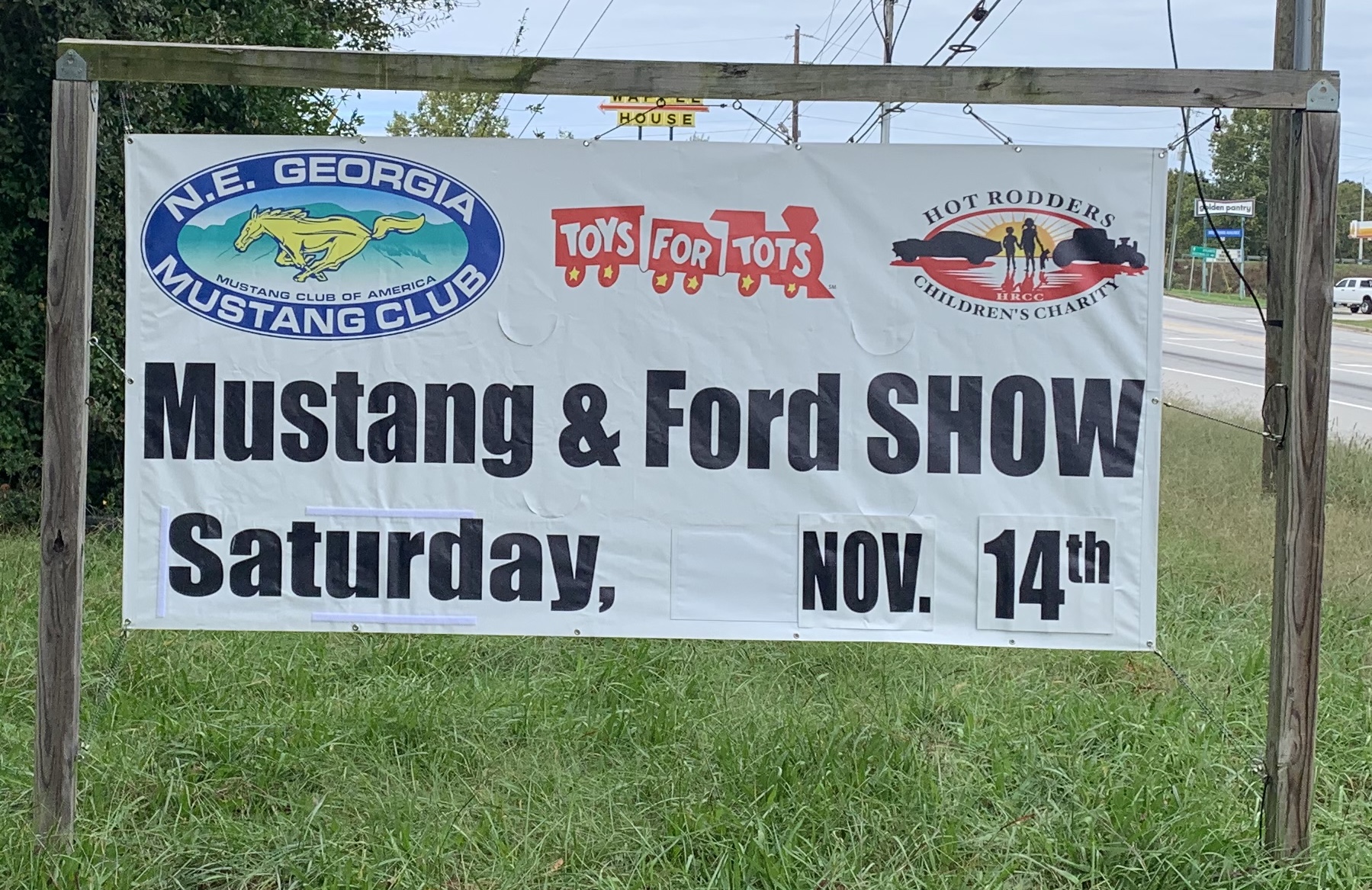 It was a great weekend for a Car Show. Thanks to YearONE for allowing the NEGMC to utilize their facility. Also many thanks to the Georgia State Patrol for bringing their restored GSP Fox Body Mustang to the Car Show.

The 47th Annual Fall Regional Shelby/Mustang and Ford Meet was a huge success. Above are photos of the show favorites for each class. Feedback from the show has been overwhelmingly positive. Participants enjoyed the venue, the extra activities on Friday and how well our club orchestrated the event. Spectator responses were also very positive.

We had 280 cars and 32 Mustang II’s at the meet. People liked the blue grass music, home made ice cream, boiled peanuts and of course the Nut Man’s roasted peanuts. The booths were a huge success as was the cruise (over 40 cars participated in the cruise), the visits to Jacky Jones collection and the Meet and Greet at Memory Lane Car Museum. It was an action packed two days. The campers loved the venue, many have made reservations for next year and the Lake Chatuge Lodge was a great host hotel as well.

The Mustang II reunion drew 32 cars from as far away as Michigan ,Illinois and Florida. The cars looked impressive as the participants and spectators entered the fairgrounds. We called the area Mustang II Alley. Doug DeLorme who worked for Ford for 30 years, displayed the only Western addition 1976 Mustang II along with his 1976 Western addition Ford F-150. Across from him, inside the fairgrounds was John Clor with the Ford Performance tent. It was an honor to have John there with the Mustang II Reunion and in addition, to have the President of the MCA Steve Prewitt, there with his Mustang II.

Friday’s events were awesome and the Meet and Greet was a great addition with more than 100 people attending. In addition, John gave everyone in attendance a Ford Performance face mask. John and Steve both spoke to the crowd. It was very impressive seeing some of the Mustang II’s parked in front of Memory Lane Car Museum as everyone entered the door. Jerry Smith was a great host and spent time talking about his cars as well.
Jacky Jones spent the entire day on Friday talking to people that came to see his car collection. There were two couples that were hearing impaired at the event and we were fortunate to have an interpreter at both Jacky Jones and Memory lane to assist. One of the hearing impaired asked who owned all those cars at Jacky’s and one of our volunteers pointed to Jacky. They began talking to Jacky via the interpreter and Jacky spent plenty of time answering all their questions. Jacky was a great host! After the show on Saturday Jacky invited all the volunteers to his house Sunday morning to see even more of his private collection and again spent a great deal of time telling us about all his cars.

This year’s show was a great event with a lot of moving parts, which kept everyone busy. At the end of the day the board voted along with all the volunteers at the show to keep this show in Hiawassee at the Georgia Mountain Fairgrounds. The vote was unanimous.
See the great photos on the gallery page . 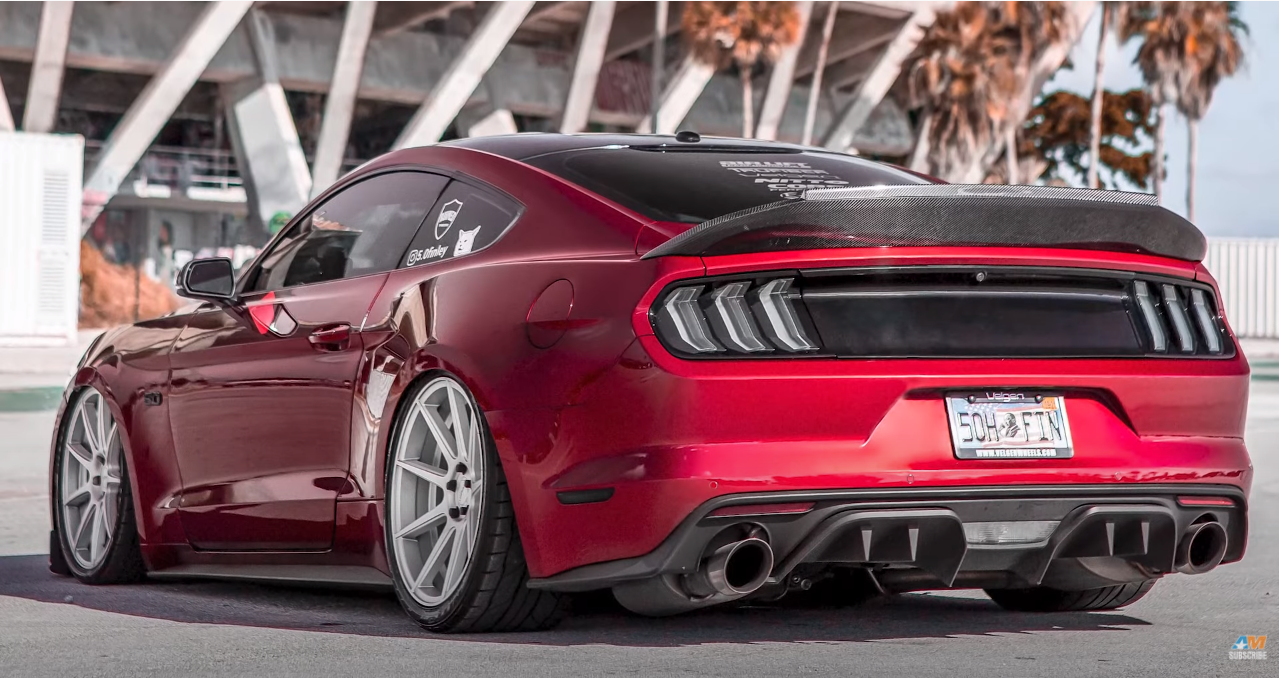 PAOLI, Pa. (December 9, 2020)-Aftermarket Mustang parts authority, AmericanMuscle (AM) releases a new episode in their“Customer Builds” YouTube series. The video features a Zoom call with Darron Finley Jr., owner of a ruby red, 2015 Mustang GTS550. The video gives viewers the inside scoop on Darron’s appearance and performance mods with bonus sound bites,professional photography, and more. Viewers can cruise on over to AM’s customer build pages to see more of Darron’s modsalong with additional images, and product specs.Darron has been throwing mods on his ride since its purchase in 2018. As the virtual walkaround begins, AM host, Justin Duganzeros in on Darron’sair suspensionkit. Darron controls the system with his cell phone and says,“the peace of mind of being ableto raise and lower the car whenever I want to is great. I love it.”They discuss other key upgrades includingMustang wheels andtires, his 4-inch cowl hood, grille, and chin spoiler. TheLED headlightswith different show modes were retrofitted by a friend.Mustang enthusiasts will also draw inspiration from the exhaust (sound clip included), cold air intake, carbon fiber spoiler, andinterior upgrades. The interview finishes with Darron dishing on his future mods and the name he’s chosen for his ride.As an AM customer since high school, Darron is a willing spokesperson for the brand. By showcasing authentic customer buildslike this bagged 2015 GT, AM hopes to inspire the muscle car community with ideas for their own ride. Additional images andinformation, including a full breakdown of Darron’s mods, can be found on AM’s website. Viewersare encouraged to subscribeto AM’s YouTube channel to be notified when a new video is released.